The Representatives of the two organizations met recently in Paris; both organizations already trained young professionals of many countries, especially the countries under development ; they decided to prepare a memorandum of understanding for complementing their actions in organizing joint training actions in the field of Road Tunnelling.

They both agreed on the importance of paying particular attention to the training of trainers, which is a very efficient tool to widely spread knowledge.

South-East Europe (SEE) represents the part of the Europe with the huge potential of underground space use. Therefore the decision to organize WTC2015 in Dubrovnik, Croatia will have a long-lasting results in promotion of methods and ideas how to apply modern tunneling technologies in local geological conditions.

Starting ITA-CET Training Courses are therefore following two basic geological formations that we are finding in the wider SEE region: soft ground in Pannonian valley and karstic conditions in limestone formation along the coast.

The intention is to show world-wide experiences in mentioned geological formations and enable easier application of new methods.

Training courses are predestinated for active engineers in the area of design, construction and supervision, for local clients that may see state-of –the art of tunneling methodology in similar surrounding and as well for young engineers that may receive information of experiences of world tunneling experts.

ITA Croatia is honored to have an opportunity to be the host of the ITA CET Foundation training session that will help in the future development of the underground space use in SEE and wider region.

From 2014, the ITACET Foundation grant a yearly distinction to  recognize the significant contribution of an individual, an organization, an institution or a private company to the activities of the Foundation.

For 2015, the Council of Foundation decided to grant his Award to the Late Dr. Koichi Ono.

An highly esteemed member of the tunnelling community Dr. Koichi Ono was since 2010 surveyor of the foundation.

The award ceremony will be held in Dubrovnik, during the ITA-AITES General Assembly.

Robert Galler, you are full professor at the Montanuniversität Leoben, Austria and chairman of the ITA-AITES ITACET committee, which was founded for education and training. What is your motivation to intervene during a short course organized by the Foundation?
I really like to be engaged in teaching underground technologies – starting from geotechnical exploration ending up in choosing the right tunnelling methodology for given conditions. It is worth to intervene doing research in the University and listen to actual problems of the practical world. From this we have a real win-win situation. With the ITACET short courses we get in very close contact to the demands of engineers in very different areas of the world. Thus also the arising issues in these specific country areas are very different. Additional to that also the education of the engineers and preparation for the problems to be solved is varying a lot, which also makes the preparation of each short course very interesting.
Last year, the Foundation co-organized with the ITA-AITES Member Nation of Buthan, represented by Druk Green corporation, a training session on "Conventional Tunnelling". It was the first training action organized in Bhutan; you were present to give several lectures.
Yes, it was the first two days training on Conventional Tunnelling in Thimphu, capital city of Bhutan. Six international trainers from ITA provided the two days training. The interest in the training action was really high; so 57 officials from Ministry of Works and Human Settlement, Ministry of Economic Affairs, Construction Development Corporation, DHI Infra, Bhutan Electricity Authority, Dagachhu Hydro Power Corporation and Druk Green Power Corporation attended the training. Furthermore his Excellency, Lyonpo Norbu Wangchuk, Hon’ble Minister, Ministry of Economic Affairs graced the opening ceremony of the training. Dasho Sangay Khandu, Hon’ble Chairman, DHI concluded the training, which shows the high priority of this training action for Bhutan.
Why did you choose this topic?
Bhutan is situated in the area of the Himalayas, so we are facing extraordinary high mountains with very challanging geotechnical conditions having very few exploration results available. Furthermore Bhutan is interested to extend its capacity in hydro power caverns. For solving such challanging construction site conditions a lot of conventional tunnelling will be needed. Thus together with Druk Green it was decided to start with a short course in Conventional Tunnelling.
Is an international gathering of lecturers  beneficial to the audience?
ITACET Foundation sponsored trainers from Austria, Danmark, France and Thailand with DGPC bearing only their local expenses. Jaiprakash Associates, Hindustan Construction, Ugen Earthmovers and Atlas Copco also supported the training. This made the training action to a real international event which is in my opinion most beneficial for the audiance, as they are able to listen to experiences of tunnel engineers from different point of views.
There might be differences of opinion, methods and philosophy among the lecturers; is it not confusing for the audience?
No, at the end we are engineers and all of us learned that we have to capture the principles of physics, mechanics, geotechnics and others in the same way. I agree that there are different philosophies in doing that depending on the experiences which engieers from different countries have. And it is very good to show the audience the different experiences. So after the short course they are free to decide what could be the best way for them to solve their project specific challanges.
What was your feeling on the audience response in Thimphu?
We had intensive discussions with the audience – so the response was really good. At the end my impression was, that the ITACET courses would have to be extended to about 5 days to capture all the questions of the audience and to go in the one or the other detail. However I think the  ITACET Foundation and the ITACET Committee are on the right track to achieve better knowledge in the field of geotechnics and tunnelling around the globe through intensifying Education and Training.
Robert Galler, Thank you for your time.

The two-day training course for graduate students and young engineers will be held prior to the WTC2015 opening, Friday 22nd and Saturday 23rd May 2015.

The ITA-CET training sessions are delivered by globally established professionals and experts in these related topics and their aim is to contribute to the education and knowledge of students and young professionals in tunnelling field.

The training session aim to provide general information to young engineers & to update tunnelling professionals on topics related to Mechanised Tunnelling. The Course topics are presented in such a way to build the basic concepts of Mechanized Tunnelling necessary for professionals.

More information and registration information will be published on  on the website www.amitos.org

The ITACET Foundation will co-organize with the Myanmar Tunnelling and Underground Space Committee (Myanmar ITA Nation Member) a two-day training session in Yangoon.

The program main topics are:

Other events in preparation:

The objective of the course was to provide general information to young engineers and to update tunnelling professionals on topics related to Mechanised Tunnelling. 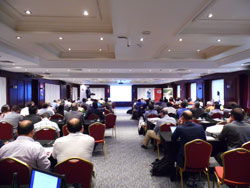 It was the first training event organized in Chile since the ITACET Foundation has been created five years ago. This event was very effectively co-organized by CTES (Chilean Commitee for Tunnelling and Underground Space of the CDT of the Chilean Construction Chamber) the ITA-AITES Chile nation member.

The Opening speech was given by Alexandre Gomes as President of CTES Chile.
In the audience were guests from People Transport Company (METRO), the Ministry of Public Works of Chile, National Corporation of Cooper (CODELCO), Energy producer Company (AES GENER S.A).

The course topics were presented in such a way as to build the basic concepts of Mechanised Tunnelling necessary for professionals.

On the first day, the theme of the lectures of the first session was “Introduction & Overview”, and the second session were devoted to “Improvement & Support systems”.  On the second day the first theme was on “operation” and the second on “Management & examples”. See the program of the event for more information (Pdf) >>

About the training session, a word from Alexandre Gomes, President of CTES Chile:
“We are very happy and satisfied with the realization of this workshop. More than 100 professionals who were trained in these two days and had the opportunity to participate in an event of high technical content and importance to the field of tunnels and underground spaces”

Finally, our thanks to all attendees for their active participation and contribution to the success of the training session.

CTES Published a Press release in Spanish on their website, you can read it here >>

Press Release. The training session organized by the Institution of Engineers, Malaysia (IEM) and the ITACET foundation gathered 40 participants.

The objective of the course was to introduce the design and construction approaches for tunnelling in urban areas. 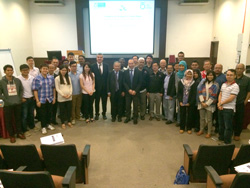 On the first day,  Messer Ir. Dr. Ooi Teik Aun & Soren Degn Eskesen welcomed the participants and opened the training session.The three session of the day were on the following topics "general", "mechanized Tunnelling" and "conventional Tunnelling".
The second day started with the session on "risk management" followed by "monitoring" and "Case Histories".

High level of the presentation, very interesting case review and an active participation of the audience insured the success of the training session.

The program of the event, including a short presentation of the speakers
is available to download >> 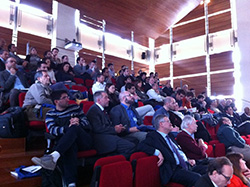 The participants were welcomed by opening speeches from delegates of the authorities of the city of Torino, SIG and the rector of the Politecnico of Torino. 15 Internationally recognised experts from the academic and entrepreneurial fields presented a total of 16 papers.
The first two session were dedicated to “General aspects and main features of conventional tunneling” and “Lesson learnt in relevant conventional tunneling examples in different soil and rock conditions”. During the second part of day 2, industrial representatives shared their field experiences during the session on “Special examples and innovations”.

The lively ensuing discussion reflected the great interest shown by those taking part in the topics and the successful conclusion of the course.