Press release - The Foundation together with the Riyadh Municipality and the participation of PIARC, the World Road Association organized in Riyadh a seminar on "Safety In Urban Tunnels". 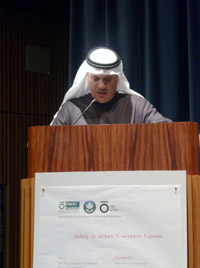 Introduction and closing remarks were given by the host of this event, H.E Eng. Abdullah Al-Mogbel, Mayor of Riyadh and President of the ITACET Foundation. (Left picture)

Lectures were delivered on three main topics, namely "General Overview", "Safety in Design" and "Safety during operation and maintenance".

Lively exchanges between and among prticipants and lecturers were developed at the occasion of the two Round Tables on Safety in Road and in Metro Tunnels:

Round table on Road Tunnels:

Riyadh Development Authority representative explained the safety measures taken for the Road Tunnels, especially the King Abdullah Road Tunnel and the Tunnel under the Runway at the airport.

The audience asked questions about Fire Safety, Transport of dangerous goods, Drainage, Ventilation, criteria of choice between Tunnel and Bridge, Training of Fire brigades,…; the audience also pointed the special role to be played by TV and other medias for the dissemination to the Public of the information regarding Safety

Round Table on Metro Tunnels:

Riyadh Development Authority representative presented the future metro network (6 lines – 176 km long including around 40 km tunnels) and the specific safety measures and equipment planned, especially for avoiding human errors (driverless metro) and falling of objects on the tracks (sliding doors in the stations) and also for guarantying safety of the users in case of fire.

Numerous questions were discussed with the audience related to the fare, to the electricity supply, to the safety exists, to the parking related to the network, ..etc.

More on this event in the Promotional leaflet >>

Pierre
SCHMITZ
Formerly Ministry of the Brussels Region - Retired in 2015