Control and Monitoring of Tunnels and Underground Space 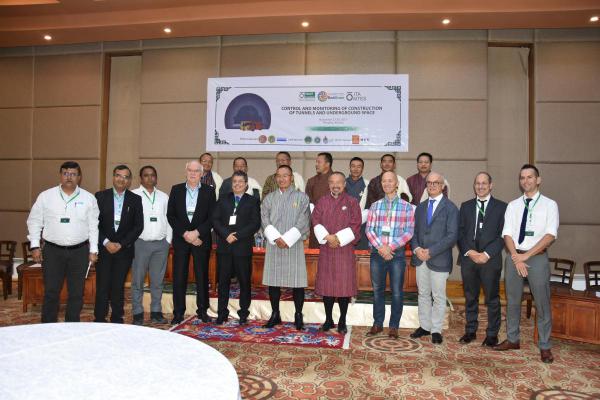 The ITACET Foundation and the Druk Green Power Corporation Limited (DGPC) collaborated to conduct a training session on the “Control and Monitoring of the Construction of Tunnels and Underground Space” on November 27th & 28th 2017 in Thimphu, Bhutan.

His Excellency Lyonpo Lekey Dorji, the Minister of Economic Affairs, attended the opening ceremony. He stressed the importance of tunnelling in Bhutan which started during the construction of the Chhukha Hydropower Project. The Managing Director of DGPC, Dasho Chhewang Rinzin, (pictured left, fifth from right) emphasised the importance and benefit of Bhutan being a member of the International Tunnelling Association. He also stated that although knowledge on tunnelling in Bhutan is currently mainly focussed on hydropower, future perspectives include other areas such as highways and railways.

This was confirmed when His Excellency Lyonchhen Dasho Tshering Tobgay, the Prime Minister of Bhutan (centre of the photo above), concluded the training session and awarded certificates to the participants. During his closing speech, he emphasised that the country needs to build more tunnels, not just for hydropower, but also for road connectivity and other purposes. He reminded the attendees that despite Bhutan's challenging topography, its ancestors have built huge structures such as the Trongsa Dzong fortress, the biggest structure in the country and as tall as a 17 storey building. He described how two Trongsa Dzongs could fit into the impressive Punatsangchu-I hydro-electric power house cavern. He added that road tunnels however, currently constitute just 1.5 km compared with the 150 km of tunnels built for hydropower projects.

Mr Tobgay (pictured left) presented a scenario where Thimphu would be connected to Paro and the Punatshangchhu valley via road tunnels and Paro would be connected to Haa through another tunnel thereby reducing the congestion in Thimphu. In order for such scenarios to become reality, His Excellency stressed that Bhutan needs its own expertise and that training on tunnelling  and underground space  is a major turning point. “We are learning to build our own tunnels,” he said. "Combined with economic growth, the community of engineers is also growing". 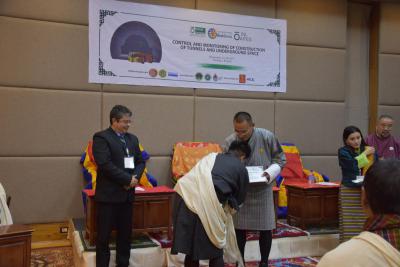 Mr. Alexandre Gomes, ITA Vice President, (pictured at the award ceremony, right) agreed that the country is in the right direction and that there is a clear political will. “Bhutan can count on the ITA for support in overcoming the challenges pertaining to tunnelling and underground space” he said.

The training session was followed by a highly interesting site visit on the 29th November to the Punatshangchhu Hydroelectric Project, attended by some of the lecturers and DGPC officials. 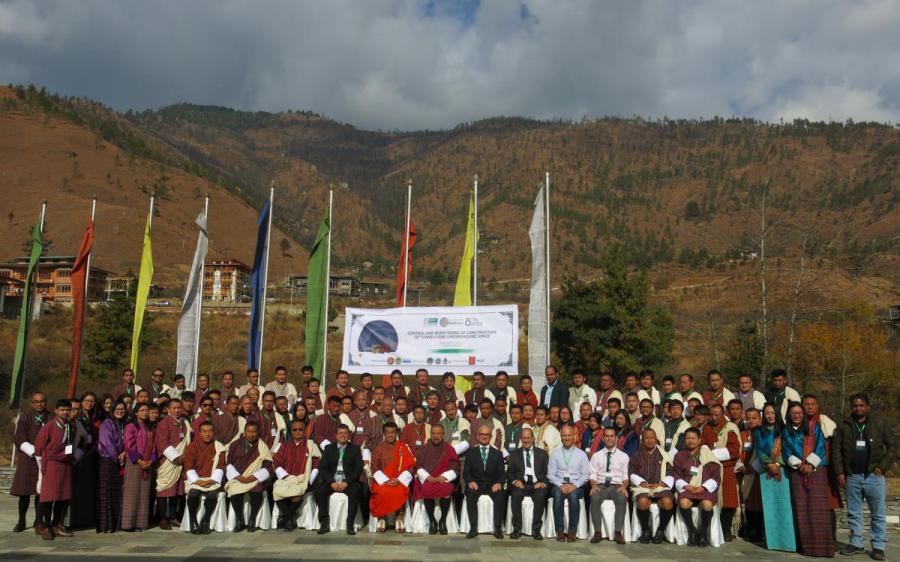