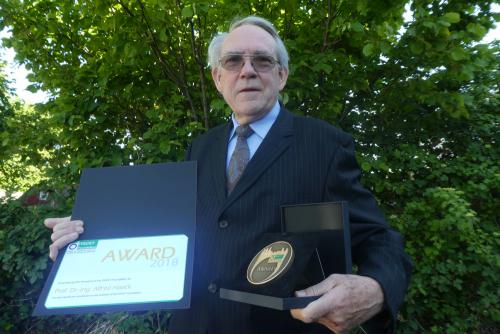 During the official opening ceremony of the World Tunneling Congress in Dubai on April 23, 2018, the former ITA President and longtime STUVA Managing Director Prof. Alfred Haack was honoured with the ITACET Award 2018.

Professor Haack receives the ITACET Award 2018 for his remarkable contributions to the Foundation. As early as 2000, during Haack's own ITA presidency, it became increasingly clear that the growing global demand for well-trained engineers posed an increasing challenge to precisely this international tunneling association. It was Haack who set the course for education and training at ITA and continues to provide advice and support to the ITACET for this purpose to this day as an honorary member of the Committee of Surveyors.

The prize, which is awarded for special merits to ITACET, has so far been given to only four people: 2014 to Prof. Andre Assis, 2015 to Koichi Ono, 2016 to Harald Wagner and 2017 to Martin Herrenknecht.

In addition to Professor Haack, in 2018 for the first time an organization is also honoured with the ITACET Award. The Chilean CTES (Comité de Túneles y Espacios Subterráneos de Chile) has been honored for its remarkable contribution to the work of the Foundation. For many years, CTES has regularly organized trainings such as the International Workshop on Risk Management in Tunnels.

"I feel really honoured by this award and thank all those who participated in the decision.

Let me add a few personal thoughts regarding ITACET – the organisation which gives the background for this specific award I have been granted today. I clearly remember the year 2000 during my ITA presidency when we thought about the future strategy of our Association.

It was obvious: The rapid technological progress in tunnelling and the increasing worldwide need for new infrastructure not only demanded more, but above all, highly trained junior engineers. That was the reason for our decision to set education and training as one of our most important strategic goals, even though ITA at that time did not have any money, staff or facilities available to follow such a high goal.

Consequently, in 2007 ITA decided to create a Committee on this subject and that was the moment ITACET was born. Soon it became clear that funding and organisational aspects asked for a stronger structure. Thus, initiated by Engineer Abdullah Al-Mogbel of Saudi Arabia, an International Foundation on Education and Training was formed in 2009. Since then, this institution has offered a very effective tool to support students and young engineers in their professional development and career. The activities of ITACET during the years since its creation have been proof of this.

I wish ITACET continued prosperity and further development of its educational and training offers in the future. Because one thing is just as true in 2018 as it was 18 years ago: The tunnel construction industry can only be successful if young people have excellent training. And that is why this successful organisation earns all our support - and enough money - to keep on the work for a better and peaceful future. I encourage the entire ITA family and all the individual as well as industrial sponsors to continue  supporting ITACET!

I wish you all and especially ITACET a prosperous future. Thank you!".

Article and photo courtesy of STUVA